Get It Out For Cardiff 2010 wins LARAC partnership award 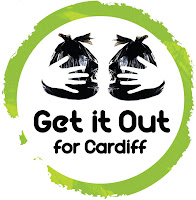 The Get it out for Cardiff team is celebrating after Cardiff Council’s City Services won a prestigious award at the Local Authority Recycling Advisory Committee (LARAC) 2011 Award Celebrations last month. The team scooped the Best Partnership gong for their 2010 campaign and is a fantastic boost as the 2011 campaign has just drawn to a close after another great year.

The Best Partnership award is for the local authority which has worked successfully with one or more partners that are within the private or third sectors or with others such as resident groups.

The aim was to maximise student reuse of a variety of household items and minimise the environmental impact students create when they leave the city.

Bikes, electricals, clothes/bags, food and pots/pans can be donated to charity and in some cases sold back to the student community. Most end-of-year waste headed for landfill; now students have the choice to dispose of their waste in an ethical and sustainable manner.

Executive Member for Environment, Cllr Margaret Jones said, “I am delighted we have won this award, it is brilliant recognition for a model of partnership working that delivers great sustainable benefits to the city, year in, year out. I congratulate all involved for this great achievement.”

Student Liaison Officer, Kieran McCann said, “As the city’s student liaison officer I was very proud to be able to help set up the partnership, which brought together so many different agencies to benefit charities and divert materials away from landfill. It’s great winning awards but we’re not going to stand still, this year’s campaign has just finished and was very successful and we’re already looking ahead to next year’s activities."

Chris Davies, Cardiff Students Union’s Welfare and Communication Officer said, “We are very proud to be part of such a fantastic partnership program. Waste generated by students is a highly contentious subject so it is amazing to share the success of the Get It Out for Cardiff scheme whilst addressing this issue simultaneously. By working together, both myself and the Unions Financial and Commercial Officer, Nicholas Matthew are both keen to see the Get It Out For Cardiff scheme continue and develop further“.

http://www.cardiffdigs.co.uk/getitout.htm
Posted by Cardiff Digs at 09:46