Environmental Champions were out over the weekend promoting the Get It Out For Cardiff scheme and Charity collections.

20 Environmental Champions volunteers working with Raise And Give, volunteers from the community, all four Cathays councillors, the chair of the landlords forum, waste management and Cardiff Student Union were out Saturday and Sunday. They gave up their time to door knock around the community promoting the charity element to the Get It Out For Cardiff scheme and using wheelbarrows to collect any donations http://www.cardiffdigs.co.uk/getitout.htm

With wheelbarrows provided by Cardiff Parks Service, delivered by Cardiff Rivers Group/Keep Wales Tidy, volunteers had a wheelie great time collecting items that people had to donate. Barrows full of clothing, kitchen equipment, food and electrical items could be seen rolled down the street. Some of the more unusual donations included Roller skates, a Chocolate fountain, Popcorn maker, electrical salad spinner, and items of fancy dress. The items were taken to the Green Zone and YMCA bank. These Green Zones will be open for the next few months for donations, so the message is when you clear out at the end of term donate items of re-use that you don’t want to struggle home with. 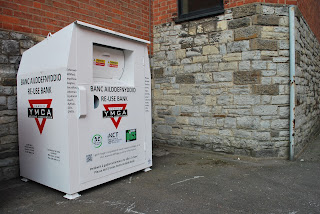 Get It Out For Cardiff
21 Green Zones are set up in halls of residences and Student Unions across the city to accept donations of clothing, food (tins, packets, jars etc), small electrical items, books, CD’s, DVD’s and kitchen items (plates, mugs, utensils, pans etc)

14 YMCA re-use banks are also in place to work alongside the Green Zones to collect clothes, shoes, bags, textiles, small electrical items, books, CD’s/DVD’s at the end of term and year round.

A number of charities are set to benefit from the scheme. Food is being collected for FareShare Cymru - supporting communities to relieve food poverty.

Clothing, electrical items, media and bric-a-brac is being collected for the YMCA to directly reinvest in projects and services for homeless people at the Cardiff YMCA Housing Association whilst kitchen items will be stored over the summer by Cardiff Self Storage and sold at the start of term at heavily discounted prices with all proceeds going to charity.

The Get It Out For Cardiff scheme includes extra waste collections in Cathays, Roath and Gabalfa over 3 weekends in June. Students can put out extra recycling and waste on 3 Saturdays in June; 16th, 23rd and 30th – for an early Saturday morning collection.

Campaign information including pin point google maps of the locations of the Green Zones and YMCA banks can be founds via the website: http://www.cardiffdigs.co.uk/getitout.htm