On Wednesday Cardiff had much to celebrate at this year’s Welsh Varsity winning both the Varsity Shield and Cup.

The day saw Cardiff play Swansea in a range of grudge matches with the final score of 18 to Swansea’s 5.

Besides the day’s victories Cardiff had much to celebrate as they took those high spirits to the Millennium Stadium to watch Cardiff come out victorious to claim their fifth Varsity Cup win in 16 years of the Welsh Varsity. Final score was 33-13

With thousands of spectators and an attendance of 15,662 at the stadium there were plenty of revellers out on the glorious day. Keep Wales Tidy were tasked with being the clean up group for the Varsity events on Pontcanna fields and around the Welsh Institute of Sport. 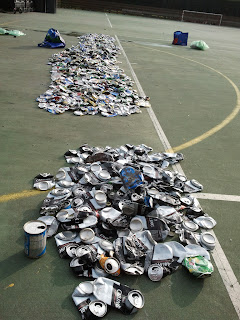 From 1-7pm they had 40 volunteers working in 2 hour slots collecting and sorting the rubbish into recyclables and non recyclables. They even went as far as sorting ferrous from non-ferrous cans. Altogether, they collected 3 large bins of recycling, 1.25 large bins of general rubbish and 10 bin bags full of crushed aluminium cans.

The pictures from today, show the volunteers returning to the collections area with the sorted can line getting longer and longer. 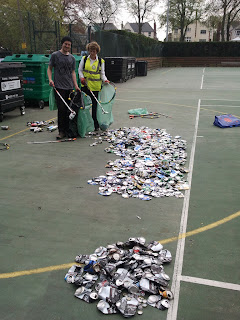 Many of the volunteers took advantage of free tickets to watch the Varsity Rugby Game in the evening and enjoyed the atmosphere and a Cardiff win.

"I'd like to thank all the volunteers who were brilliant today. They worked really hard, were friendly to the students and coped with students coming in from all directions and both sides of the river. They cleared from 1-7pm clearing both sides of the River from Blackweir down to the end of Bute Park and all around WIS. It was a challenging day but most of the volunteers reported that the visitors from Swansea were very polite and placed bottles and cans in the bags as the volunteers passed by”