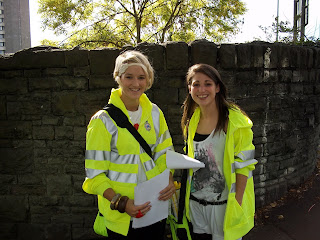 In the second in a series of guest blogs we asked a student from Cardiff to write about their experiences volunteering with the Student Police Initiative in Cardiff. Samantha Beynon (seen above on the left) is a 3rd year student studying Criminology. She is an active member of the Student Police Initiative, the group are on a community walkabout this Friday so we asked Sam to tell us about her experiences…
Hiya guys! My names Samantha and I’m in my 3rd year at Cardiff Uni studying Criminology. I’ve been volunteering with the student initiative in connection to South Wales police for three years now. I never really thought I was the ‘type’ to volunteer but the police initiative seemed like a really appealing idea for me to gain some hands on experience within the police and working in the community. I went along to the meeting and was greeted by the friendly police officers from Cathays station, representatives from various council and community organisations, as well as other like minded students. 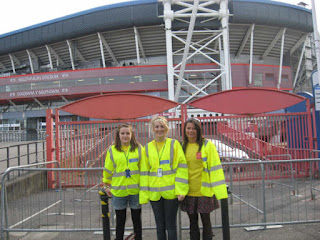 After completing an application form –which as it turns out wasn’t too bad – I was part of the team and ready to get involved. As a collective (the students, police officers and council/community representatives) we meet regularly at times that suit us and go out on patrol in the Cathays community. When out on patrol one of the main objectives is to promote the ‘Lock it, Hide it, Keep it’ scheme this involves reminding fellow students to keep an eye out for themselves and those around them by following some basic crime prevention guidelines on how to stay safe within their community. On patrol we go out in pairs armed with walkie-talkies and our South Wales police volunteer uniform and carry out the objectives set for that day such as: take your stuff home in the holidays as an empty student house is an easy target for thieves!
As a student who only lives in Cathays during term-time it is often hard to remember that there are families and individuals who live in the area permanently and we as students can often cause disruption to them, frequently it’s unintentional i.e. making a bit too much noise late at night so we remind fellow students about their social responsibilities and that they aren’t in a student bubble but live within a community. 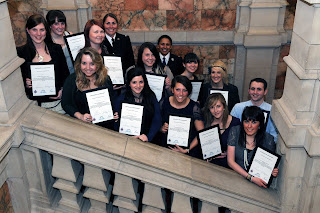 A key moment that defiantly stands out for me is when we were taking part in an initiative that encourages students to lock their doors – even when their in – and we knocked on a door of a ‘permanent resident’. It was an elderly lady who lived alone – she greeted us at the door and listened cheerfully as I explained the purpose of our visit and that we were student volunteers with South Wales police. She thanked us for passing on the crime-prevention information and calling by and she ended by telling us that we’d really made an impact on her day as the previous night she’d had a person ‘bobby knock’ her door and she was frightened as she lived alone. This elderly lady telling me that I’d made her feel safer and, that there were people in the community who looked out for others really made me feel like I was taking part in something worthwhile. At the end of the day I would love people to be doing what we as the student police initiative are doing in the area where my grandmother lives – just for that extra peace of mind.
Working as part of a team alongside the authorities and those people living and working in the community has really strengthen the confidence inside and strengthened the desire I have to pursue a career as part of the police. I’d recommend this volunteering project to everybody who wants to make a difference to the people around them, gain some invaluable life skills and have something to make your CV stand out from the others!

The student police initiative will be out on patrol this Friday so please give them a warm welcome if you see them.

You can learn more about their work and the Lock it. Hide it. Keep it campaign here: http://www.cardiffdigs.co.uk/lockithideitkeepit.htm

Students places are still available for those wanting to volunteer and more information can be found here: http://www.cardiffdigs.co.uk/policestudentvolunteers.htm
Posted by Cardiff Digs at 04:25