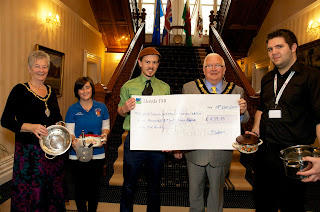 The Lord Mayors Charity, LATCH has received a donation of £439.55 from the proceeds of a Bric-a-Brac sale held at Cardiff Students Union.

Raise and Give in association with the Student Liaison Officer, Cardiffdigs.co.uk, Cardiff Self Storage and ‘Get It Out For Cardiff’ helped with the fundraising.

The bric-a-brac items were donated and collected during the ‘Get It Out for Cardiff’ campaign by students leaving at the end of term last year and stored with Cardiff Self Storage over the summer.

The charity idea administered by Kieran McCann, Cardiff Council’s Student Liaison Officer and the Waste Management recycling team meant that Raise and Give were able to sell the items at heavily reduced prices. All donated items that were reusable were sold including kitchen equipment such as saucepans, frying pans, and cutlery and all those essential household items. 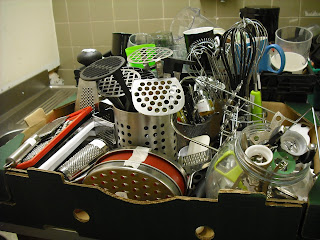 Students expressed delight at being able to pick up a bargain, while helping charity at the same time, some others said it meant that they wouldn’t have to raid their parents/guardians cupboards for all the equipment – and that mum would be delighted to still have her kitchen intact.

The event not only offered items at bargain prices but also hopes to encourage students to reduce waste and reuse household items; a financial and environmental winner as people can get their house kitted out without having to purchase new.

Councillor Judith Woodman, Cardiff Council Executive Member for Communities, Housing and Social Justice said: “The sale has completed the recycling circle; what students were prepared to throw out at the end of term is exactly what our returning students need. Storing the donated goods and setting up the sale has helped reduce waste by stopping people having to buy new, saved everyone money, prevented landfill and donated to a very worthwhile charity”

Darryl Light Finance and Commercial Officer for Cardiff Students Union said: "This event is a fantastic opportunity for students to decrease their environmental foot print by donating used items which would otherwise go to a landfill. It also gives students the opportunity to pick up some items they would buy new at a discounted rate, including some oddities. I want to thank RAG and Kieran for the successful running of the event, and hope we can hold another sale soon."
Posted by Cardiff Digs at 05:06

Labels: LATCH charity and get it out for cardiff