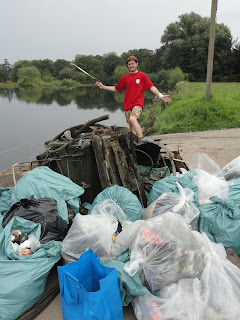 The Great Taff Tidy that happened over the weekend of the 3rd-5th of September has been hailed an environmental success. The Keep Wales Tidy run event heralded the largest clean up of the 52 mile river Taff. Tonnes of rubbish was pulled out from the river and the banks cleared. David King from Cardiff Rivers Group one of over 60 organizations who adopted stretches of the Taff to clear up said:

‘The weekend exceeded expectations, I am very grateful for all the people that volunteered, we had people in waders, in boats, in canoes, in wetsuits and walking along the bank picking up litter and it fills me with optimism that so many people were inspired by this project.

Objects removed from the river included numerous, tyres, shopping trolleys, even a motor bike, various car parts and three safes. Estimates suggested that somewhere in the region of 30 tonnes was collected over the weekend with 20 tonnes from Cardiff based events. The final confirmed total is expected to wildly exceed expectations. Keep Wales Tidy are now working towards Tidy Wales Week on the 20 -26th of September and are appealing for volunteers who missed this weekends opportunity to get involved. Anyone wishing to undertake a clean-up should contact their local KWT project officer, call 029 2072 6994 or email tidy.towns@keepwalestidy.org
Posted by Cardiff Digs at 02:03