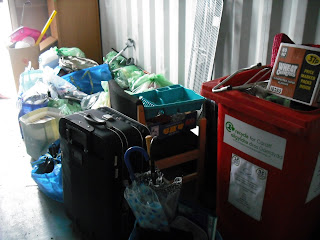 On Wednesday 29th of September Raise and Give in association with cardiffdigs.co.uk, Cardiff Self Storage, Get It Out For Cardiff and the British Heart Foundation will be holding a Bric-a-Brac sale in Solus at Cardiff Students Union.

The event represents the sale of reusable and bric-a-brac items that were donated by students leaving at the end of term last year and stored over the summer collected during the Get It Out For Cardiff campaign.

Raise and Give will have a stall selling the items at heavily reduced prices including kitchen equipment such as saucepans and cutlery and all the donated re-usable items. Any money raised will be donated to the Lord Mayors Charity LATCH which is a voluntary organisation set up to support the special requirements of the children's oncology centre at the Children's Hospital for Wales.

British heart Foundation will also have a stall with a range of PAT tested electrical items such as kettles, toasters, stereo equipment etc.

The sale starts at 10am Wednesday 29th of September students and the community are invited to come along to pick up a bric-a-brac bargain.

The sale not only offers items at bargain prices but also hopes to encourage students to reduce and reuse household items. It is a financial and environmental winner as people can get their house kitted out without having to purchase new.
Posted by Cardiff Digs at 00:51