Over the weekend volunteers from Raise and Give (RAG), the students union and cardiffdigs were out and about in Cathays and Roath collecting charity donations and door knocking the area reminding everyone about Get It Out For Cardiff starting this coming Saturday http://www.cardiffdigs.co.uk/getitout.htm

Volunteers armed with wheelbarrows and the trusty milk float were collecting donations from residents and reminding everyone to donate unwanted goods to the ‘Green Zone’ at the Student unions and halls of residences at the end of term.

-Barnardos: Clothes, belts, shoes and bags. No duvets though please.

-Kitchen bric-a-brac such as utensils and cutlery is being collected for Raise And Give (RAG) for resale at the Union this September.

To save lugging these items home with you why not give them to us and we will donate them to charity on your behalf. If you have any items that can be re-used by charities, there are Green Zone collection points in Cardiff University, UWIC, Liberty Living and Victoria Hall student halls or in the Green Zone in the main reception area of Cardiff Students Union. The Green Zones are open everyday for the next few months.


‘Although we got some strange looks walking the streets armed with wheelbarrows and being followed by a milk float everyone was very receptive to us. We are very grateful to those that donated items on the day and our thanks to all those who promised to take their unwanted items to the green zone when they have a clear out. My personal thanks to Darryl Light and Raise and Give volunteers for all their help and enthusiasm on the day’ 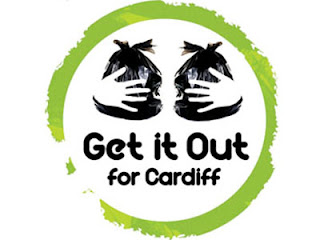 Get It Out for Cardiff, is now in its seventh year, helping students to clear out their rubbish at the end of the academic year. The aim is to re-use and recycle as much of it as possible.

So if you are a resident of Cathays, Roath and Gabalfa you will have extra rubbish and recycling collections on three Saturdays in June and July:

For a comprehensive list of items that can be recycled in your green bag collections see www.cardiff.gov.uk/recycling

Any items stored over the summer are being kept at Cardiff Self Storage who have kindly supported GIOFC 2011 by supplying a storage container.
Posted by Cardiff Digs at 04:12