BUY NOTHING DAY LITTER PICK IS A SUCCESS 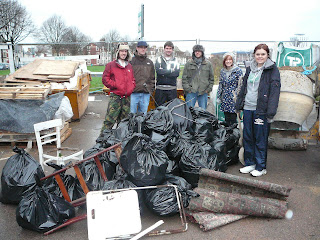 Over the course of the day over 35 bags of waste was collected by 15 community volunteers who concentrated their pick along the Taff embankment.

Volunteers aged from 9 year upwards picked up an assortment of waste that had been discarded and littered the bank side. Waste including a discarded bike, three chairs, a mop, carpet, umbrellas was removed, the group found a wallet containing a driving license and ID which was handed to police plus lots and lots of crisp packets, plastic bags, cans, general refuse and some more undesirable items.

Using 8ft and 10ft litter picks to reach the often ignored, but highly littered areas along the bank they tackled the brambles and freed the waste helping clean up the area.

On one of the year's busiest shopping days, ‘Buy Nothing Day’ asked people to stop shopping - for a whole day! The day gave everyone a chance to step off the treadmill and really think about what we are consuming and the environmental consequences. 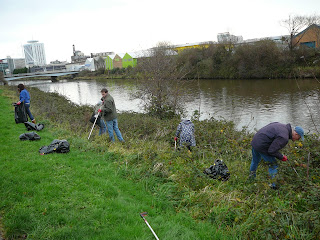 “My sincere thanks to the volunteers who helped make this day such a success. The rubbish that we were picking up was evidence of how wasteful our society is. We were shocked at what had been discarded and littered the Taff. Spending a day without spending allowed us to consider the environmental and aesthetic impacts that over-consumption and the waste produced has on our communities. Buy Nothing Day helped us to make a commitment to consuming less, recycling more and making more ethical and environmentally aware consumer choices”.

Councillor Judith Woodman, Executive Member for Communities said: “Buy Nothing Day highlights the environmental effects of consumption. Over the Festive Season we'll throw away over 125,000 tonnes of plastic packaging, 6 million Christmas trees and 83 square km of wrapping paper. I would urge everyone to think about their about their consumption habits and consider recycling wherever possible.” 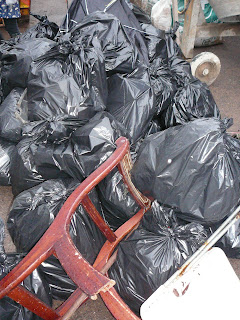 Special thanks to Indeg Jones for organizing the equipment, giving a safety talk and organizing the collection of our collected waste.
Posted by Cardiff Digs at 00:48