The Get It Out For Cardiff team working on the re-use charity side of the campaign are launching a new partnership. 14 re-use banks are being installed and trialled across key student locations. The YMCA have joined the scheme and re-use banks will collect clothing, textiles, small electrical items, books, CD’s DVD’s year round.
﻿ ﻿ The banks are located around Cardiff University, Cardiff Students Union, Cardiff Metropolitan University, Liberty Living and Victoria Halls across Cardiff (Map of locataions here) with other sites being identified and installed as the scheme progresses. This allows the scheme to become a year round campaign that targets other key move out dates as well as the end of term. The YMCA will use the materials and any proceeds from the collections to directly reinvest in projects and services for homeless people at the Cardiff YMCA Housing Association.

The end of term Green Zones will work in conjunction with the re-use banks and continue to collect food for FareShare and kitchen items that will be stored over the summer by Cardiff Self Storage and sold at the start of term with all proceeds going to charity.
Get It Out For Cardiff is a Keep Cardiff Tidy partnership. The re-use campaign is lead by the cities Student Liaison Officer, Kieran McCann and Lucy Prisk from waste management. Kieran said:

“We are always looking at inventive ways to increase the scope of re-use so I’m delighted the YMCA has come on board with the partnership. This allows us to develop the scheme year round, increase re-use, continue to divert items away from landfill and benefit charities and the local community. This really showcases ongoing partnership commitments to civic pride and dedications to recycling”

Andrew Jenkins, YMCA manager said: “We are thrilled to be involved and come on board with such an innovative scheme. With the funds from donations we will develop more training placements on the YMCA Volunteer Scheme and invest in projects and services for homeless people at the Cardiff YMCA Housing Association. Our sincere thanks to Kieran, Lucy and the team for pulling this together”

Campaign information including pin point google maps of the locations of the Green Zones and YMCA banks can be founds via the website: http://www.cardiffdigs.co.uk/getitout.htm 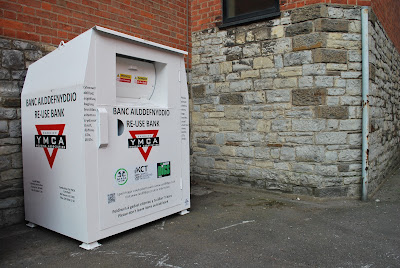