Get It Out; Donate It Don’t Waste It Charity Campaign is tonnes of success. 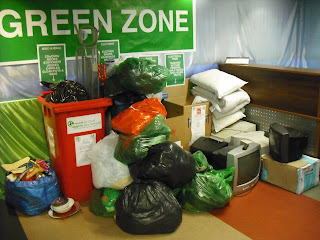 Now entering its sixth year, the award winning Get It Out For Cardiff (GIOFC) Campaign is a Keep Cardiff Tidy (KCT) Initiative. This year saw a huge charity push across the city resulting in unprecedented results. This is a scheme where unwanted items are donated by students for charities to collect and sell.

In co-operation with the Salvation Army, British Heart Foundation, FareShare and RAG, ‘Green Zones’ were set up across the city allowing students to donate re-useable items. The results speak for themselves:

Over 3 tonnes of clothing

One tonne of food

244 electrical items were collected (approximately 488Kg) of which 152 passed an electrical test to ensure they were safe for sale, which should raise around £2,000.
Half a tonne of bric-a-brac was donated and saved from landfill.

Working with Cardiff Council’s Student Liaison Officer, Kieran McCann, all 21 student Halls of Residence across the city plus Cardiff Student Union set up ‘Green Zones’ and encouraged their students to participate.

The clothing will be re-sold or recycled by the Salvation Army to help fund beds for the homeless and much more. The food will be used by FareShare to relieve food poverty for the most vulnerable communities in the UK. 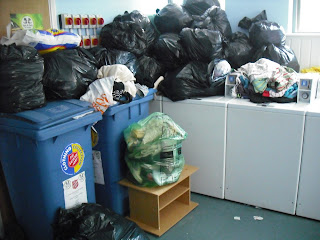 A fete at Cardiff Students Union will sell the Bric-a-Brac items such as kitchen equipment, books etc. to students and the community at low cost. The British Heart Foundation will also sell the donated electrical items such as kettles and toasters at the fete and through its shops to assist its aim to beat heart disease.

The fete is open to anyone to attend and will be held on the 29th of September in Cardiff Students Union, it is a financial and environmental winner as students can get their house kitted out without having to purchase new. This initiative was made possible by Cardiff Self Storage who donated a unit to store the items over the summer. Bric-a-brac proceeds will be used to roll out the re-use campaign over the whole academic year and will be donated to RAG (Raise And Give)

“What can I say, it’s been amazing. It’s heartbreaking to see what re-usable items are sent to landfill every day across our city - initiatives like this offer optimism and fills me with enthusiasm. We have donated.tonnes of items that otherwise would have been disposed of, ensuring a win win situation for all, not least the environment. Everyone involved should be immensely proud. I think this is an example to all and sets a precedent. Thank you to all KCT partners, the halls of residence managers and staff, Cardiff Self Storage, Waste Management, the charities, unions and universities and of course all the students who donated and gave their time to make this work. We already have exciting plans to make this bigger for the coming academic year.

“The Get It Out For Cardiff Initiative has been a great success and very much mirrors Liberty Living’s attitude to waste management. GIOFC and Liberty Living have achieved a winning outcome for all those who gave and those who receive” 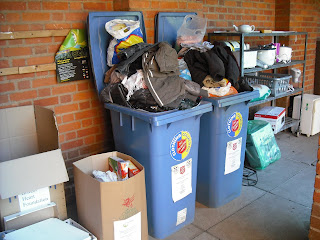 “Having recognised the importance of the campaign, Cardiff Self Storage was enthusiastic to contribute towards such a worthwhile cause. The benefits of helping the student population of Cardiff whilst also supporting local communities and charities was key to our involvement. It is great to see that our storage units have provided the flexible short-term storage solution for the items that have been successfully collected and recycled”.
Posted by Cardiff Digs at 04:41