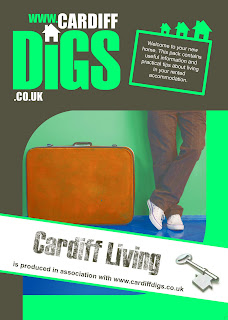 Whilst students have being enjoying their long summer break, Cardiff Council’s Student Liaison Officer Kieran McCann has been busy preparing for the new term.

Kieran is Wales’ only Student Liaison Officer and his role is to ensure new and returning students to Cardiff are informed and advised on issues relating to them (Safety, housing, security) . He is also tasked with making sure students are aware of their responsibilities within the community (Neighbourhood relations, Waste and recycling etc)

Students bring a lot to a community and its Kieran’s task to make sure students and local residents form good relationships.

Kieran Says: “As well as the financial benefits students bring to a community they bring a wealth of skills, volunteering hours of their own time to help within the community. It’s my job to encourage good relations between new and existing residents, by educating students about responsibilities and encouraging active participation within a community. I have also developed a new magazine called UNITY to keep residents and students updated on what work is going on where they live.”

In his role Kieran regularly attends PACT meetings and discusses issues that students and local residents may have, during meetings Kieran has distributed his Cardiff living pack. The pack contains useful information and practical tips about living in rented accommodation with details of things that should be done as soon as you move in, including community responsibilities, ground rules etc. The universities, student unions, letting agencies, accommodation services, and private landlords have worked with Kieran in distributing these special packs to students.


Cardiff Living is produced in association with http://www.cardiffdigs.co.uk/ a one stop website for student housing and living needs. The website is a great source of information, giving advice tailored to students. Local residents and parents may also find relevant information on the website. 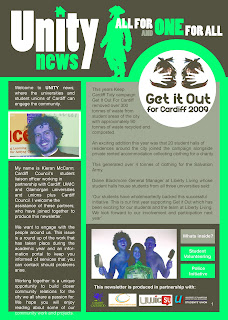 Another unique and innovative approach to further spreading this advice is through Kieran’s podcasts. The podcast’s are available to download from cardiffdigs.co.uk and can be imported into iTunes and listened via any Mp3 player or opened via any audio/media player.

Kieran has the full support from Cardiff University, UWIC and The University of Glamorgan who along with Cardiff Council have funded his role, with Kieran regularly working with the three student unions on initiating campaigns.

Executive Member for Communities, Housing and Social Justice, Cllr Judith Woodman, said: “Cardiff is a great place to live and study, with thousands of people moving to the city each year it’s essential that this process is made easy for both new and existing members of the community. Kieran has played a key part in ensuring good relationships have been formed and I know we have received some very positive feedback about Kieran’s role from students, local residents and landlords.”